aka Warcraft Gold Blueprint
made by Jonathan Kenins

This full review is for Massive Gold Blueprint, which is the first World of Warcraft gold guide that I bought. I have bought MGP and use it myself.

I had been making gold for a couple of years already, using my personal methods, and had started to realise that I was doing really well with the auction house and really enjoying it. I was browsing online for patch information and looking for any ideas that I could use to get even richer, or to make my life easier in the Auction House.

I came across a link to a free webinar video (that’s an internet seminar) which had a whole list of items to buy now for resale after Cataclysm, but it also explained some of the economic ideas behind why you should be buying them now, and that was really useful because I could then apply those principles to other items I could buy.

I decided to invest in the guide to make my gold gathering even better, and I also wanted to compare my methods with the Massive Gold Blueprint methods.

What do you get?

As soon as you purchase Massive Gold Blueprint, you get a short email with your membership details. This gives you access to the members area. 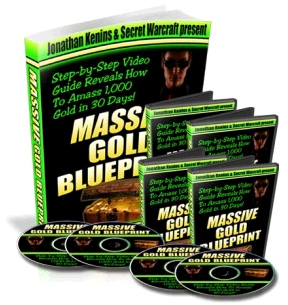 The private members area is large, with categorised lessons which are available as movies with in-game footage, and in other formats. They begin with setting up an army of alts. This is an optimal set up of alts, stationed at strategic locations, that become the backbone of the tested and re-tested system of profit pipelines.

Another section deals with how to set up all your addons, including lots of tricks like scanning for under-priced items, buying items fast, and using the advanced search. I definitely learned a few of new tips for automating my gold process here!

The movies are arranged into sections, and you can easily move from one section to another. The Massive Gold Blueprint method is really different from other ideas that I’ve heard about making gold, so you will need to watch some of them over again, sometimes pause them to tab back into world of warcraft and make some revisions to your add-ons or to search for stuff in the auction house or from vendors.

The movies can be downloaded, and so can the accompanying PDFs and MP3s. Apparently this was the first ever guide in movie format, so the guy who makes it is obviously experienced with making the movies. He churns them out every few weeks or so, whenever something new or interesting happens in WoW that directly affects gold making opportunities.

There is an enormous wealth of economic strategies, best practices, worst mistakes to avoid, and AH set-ups. Learn about different niche markets, especially the volatile market for trade goods. Also included is information on how to use cross-faction arbitrage, buying something cheaply, and transferring it through the neutral auction house to sell for a better price to the opposing faction.

I particularly enjoyed the in-game footage shot of collecting limited supply and rare items from vendors in the cities, my favourite being Booty Bay, which has so much opportunity that I sometimes find and run the movie again just so I don’t miss any â€“ lots are hidden in nooks and crannies in the town.

What’s so different about it?

You get access to a members only forum, which is stuffed full of feedback from members, and their tips on how they have used the Blueprint method to get their gold.

The promise of Massive Gold Blueprint, which is backed up by a no-questions asked guarantee, is that you can generate massive amounts of gold in the shortest possible time. It really focuses on cutting down the amount of time you have to spend on making gold, so you get to enjoy the rest of the game, and spending that gold!

You also get to join the famous Gold Speed Runs, which are similar to power leveling competitions, racing to level 85, except for making gold. Challenging the other members, with live feedback over the members-only teamspeak gives you an absolutely unique insight into the different way that the Blueprint can be used. With real-time feedback from real players, the crazy-rich elite of WoW, this must be the most powerful way of learning and improving your strategies.

Socialising with the other rich MGP members are one reason that to keep coming back to MGP, reading the forums, and chatting on Team Speak. One member, an experienced programmer and spreadsheet fanatic has created an Auction House add on, only for MGP members which we are beta testing during 2011. It’s not an official part of MGP, but just one of the perks you get from joining the group of elite rich members. I’d better not tell you any more about it, it’s super secret!

Who is it for?

Massive Gold Blueprint is aimed at level ones who are just starting in making gold in world of warcraft. The basic principles can be followed by anyone, no need for professions, mounts, or even a working knowledge of WoW because the movies guide you around by the hand. That said, I think that the players who will get the most out of this are players who already have a few gold in their bank, and understand the basics of gold making, because the methods he teaches are so unique, they can be patched onto your current gold making methods and strategies, and compliment what you already do.

Occasionally I found the lessons a little too detailed and simplistic, which was annoying because I had to fast forward. I left them running whilst I played Warcraft in another window, and tabbed back as soon as I heard something interesting. Good job his voice is pleasant to listen to, I know some of the free gold guides out on YouTube grate right on my nerves with their arrogant sales pitches.

At other times, there was so much packed into one movie I had to watch it several times to understand what he was trying to explain, especially with learning how to use his own very special system for AH researching and deciding which items to buy and resell.

I also found the layout of the categories slightly stilted. MGP was first written and recorded in 2008/2009, and it does feel a little like an old house that has had several extensions built, each adding more value to the original old house, but changing its style and creating a higgle-dee-piggle first impression. With a new reorganisation, the masses of information and lessons could be much easier and faster to access. That said, I was still impressed by the content of the movies, and the masses of detailed ingame footage and explanatory presentation that accompanied them.

Jonathan is not infallible. He recently did a members-only video to suggest we buy a particular new pattern, as it might sell for huge profits. I thought I was so lucky to snag them for 10g each, until I realised that there were so many of them, that it would be impossible to sell them for more than 50g each, so I only really gained a few gold. I was glad to be able to talk to the other members in the MGP forum and teamspeak as we were discovering together the new items and possibilities in Cataclysm.

Even though MGP was first released back in 2009, Jonathan Kenins has continually updated the guide, and now includes an entirely new section for World of Warcraft Cataclysm, There is the Bust-and-Boom plan, Crafting Crush Plan, and the Gold Rush plan. They suit different types of players, I personally went for the Bust and Boom plan, and I’m now selling some trade goods at over 400% the price I paid for each piece, thanks to careful planning, and a pre-cataclysm heads-up from Jonathan.

The extra resources section has some free bonuses, direct add-on links, PDFs and cheat sheets you can print and refer to whilst playing.

Massive Gold Blueprint is an absolutely stunning method of creating thousands and thousands ofgold in a relatively short time frame. Membership is stuffed to bursting with tips, strategies, economic understanding, and detailed information on using add-ons and current events to your advantage in World of Warcraft. It’s like a secret treasure trove: browsing through, each item reveals an even better treasure. It’s bursting at the seems, constantly growing, supported and updated by Jonathan Kenins. Membership of MGP will teach you to become one of the super rich in WoW with little effort, using methods that work on any server, for any level of player. Results are backed with a no questions guarantee.

If you want access to the over-flowing wealth of information, it is worth investing in Massive GoldBlueprint membership.

Where to get Massive Gold Blueprint

If you decide you want to try MGP, please use my affiliate link, which will result in a commission being paid to me if you decide to make a purchase. This is a win-win for both of us.

Even if you decide not to get the guide, it is worth clicking anyway, to access the free video with tips on finding a â€œPipelineâ€ and how a MGP Master makes four times the profit of the other skilled Auction House players. 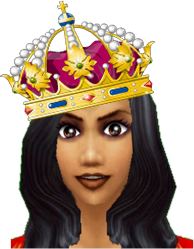 The Gold Queen is the pen name of a World of Warcraft Gold blog writer. She works as a World of Warcraft gold Personal Trainer and Coach, and writes regular articles, tips and strategies at www.thegoldqueen.com. She has a degree in Business and is a member of International Webmaster’s Association, of the Writer’s Bureau, and of a top raiding guild on a WoW European Server. The Gold Queen finds it difficult to count all her gold and fast moving Auction House transactions but believes her best week grossed over 500,000g.