The Spectral Tiger Owner’s Club is a column featuring the elite gold makers of World of Warcraft who have bought the expensive Trading Card Game Mount “Spectral Tiger”, either the rare blue, tiger, or the epic purple tiger mount.

Today we have Cat who will be sharing her success story.

My toons name is Starkissed/suzanah I play on Cenarion Circle. I am 33 years old, I have 3 children, 4 cats, 1 dog, my husband is a disabled veteran. I have been playing Warcraft since June 2007. I have found that I enjoy collecting mounts, making gold, leveling toons (I currently have 5 level 100’s, working on my 6th).

I also love running guilds and own 2 guilds, both have approximately 800-900 members in it. I also enjoy helping others out in WoW, new players I love. My motto is “Love the noobs! One day they could be the best player you’ve ever run with”.

It was about August or September of 2007, so right around when they came out. I was in love with it, but had no idea about mounts except that I loved my black stallion that I hunted down and eventually located in Southshore, back before mounts were account bound.

I honestly fell in love with the spectral tiger but when asked about it, no one would tell me how to get it. It wasn’t until a year later when I started playing the WoW TCG I would find out how to get it.

Once I buckled down & stated the spectral would be my next mount, 3 weeks I went from 100g to 669k gold so that gave me more then enough for it. (Yes, you saw that correctly…I said 100g)

How much did your Spectral Tiger cost?

525k gold, although this is a funny story. The guy who I sought out to purchase it from, he said he had one and if he sold it, he would sell it for 500k but that he was considering keeping it for himself, due to the fact its getting harder to obtain. I offered him 525k gold to get the mount and even told him the gold was on the horde side, so he told me he would put it in the auction house. I had a toon waiting to retrieve it. I bought that mount. 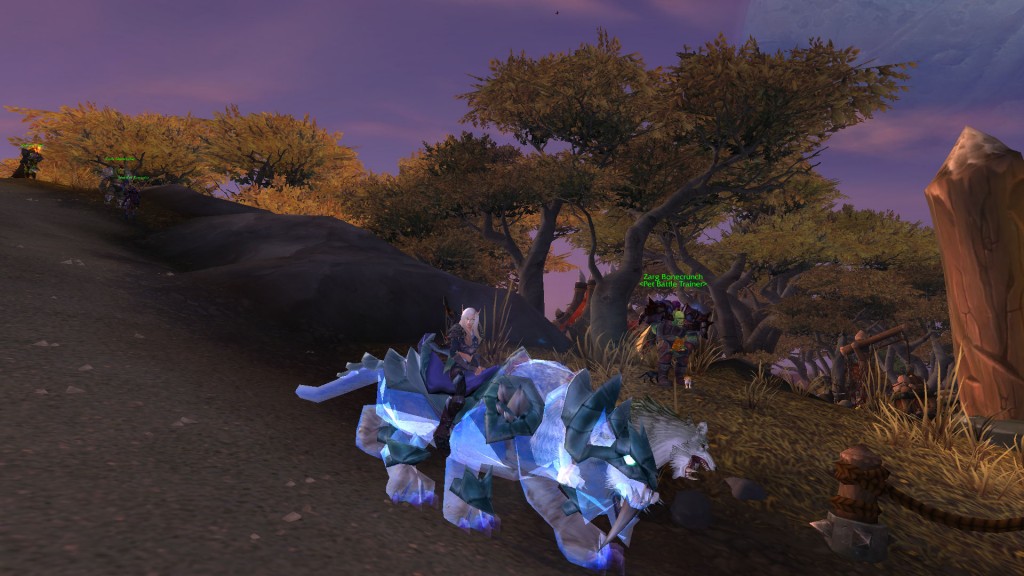 Cat with her Spectral Tiger Mount

How did you get the gold you needed to pay for it? Did you use professions, garrisons, sell services for other players, or work the Auction House?

It was a mixture of ways, I played the auction house, my main is a farmer (skinning/mining) so I used that. I generally don’t like the garrisons so I didn’t use them. I sold healing services from my Druid, taxi services to people who needed taxis, but the funniest way was actually when I decided to put a bunch of simple flours on the auction house for 20k gold each…someone bought them and then whispered me asking me for the gold back saying he didn’t mean to buy those ones. I told him I wasn’t giving him back the gold and that he would learn his lesson. He doesn’t know it, but that was the day I not only had the money for my mount, but was able to buy my sister her dream mount as well (the crimson death charger) so I bought my sister her death charger and then hoarded my gold. I also ran dungeons and LFRs, and played the auction house.  I lived in the auction house practically.

Thinking about how you made the gold you needed, how did you learn how to make it? Was it an easy process or was it a steep learning curve?

I learned to make the gold through your blog, Just My Two Copper [an extint gold blog] when they were around, and learning what worked for me, and what didn’t. It was actually a very easy process for me.

I have never been gold capped before, so that’s my goal, right now. I have already built back up to about 170k, and I make anywhere between 20-60k a week in the Auction house. I want to own the Mottled Drake and other WoW TCG mounts. I do have the Ghostly Charger, my husband bought me that one from Amazon, and I bought the Wooly White Rhino loot card off my dad, so in regards of status symbols, I do have 2 other WoW TCG mounts.

I am currently working towards getting a stables in my hunters garrison, so that I may get those mounts. So that’s my next “mount” goal in WoW.

The rarity of the Spectral Tiger, the fact that I never thought I would own it. My dad buys me Zygors Gold Guide for my birthday, and then challenges me to come up with 500k by a month and a half. so I had from May till June 2015 to come up with it. I had the gold within 3 weeks. I think that’s also what made it so special, because I beat a challenge. When I got it, I did celebrate. I made a video, here I will share a link of my video. In the video you see me buying the tiger as well as my personal celebration of it: World of Warcraft: Me buying the swift spectral tiger  I also took a screenshot & called everyone I knew.  I had to tell the world: My ultimate dream mount was finally mine.

NEVER EVER EVER give up! Never settle for less then your goal, don’t listen to others who might say “Oh don’t spend 25g to buy that and resell it, you will just lose gold instead of profit” The best thing you can ever do is give it a shot, you have no idea how often my husband has told me that something wouldn’t work (it didn’t work for him) but then it would work for me. I ran the Pets market for the longest time, it’s died down now, but I still run pets every so often. Just keep at it, be patient, set a goal in mind. Start small and work your way up. Use addons, and do not be afraid to ask for guidance. Also, watching youTube videos from WTBgold (he doesnt actually want to buy gold, he just gives visuals on how to make gold) or reading the gold queens blog and utilizing Zygors resources, it really is a big help and worth the time.

I would like to have a level cap in every class, and own as many mounts as possible. My main future plan is to never stray away from having fun. If that means I never raid again, so be it.

There are many ways to make gold in the game whether you play the auction house, sell challenge modes or farm old raids. While this is what worked for me, other people might prefer other gold making methods. I truly believe that you can get any of the rare mounts in the game that you want as long as you are willing to put in the time, effort and dedication.

I really just want to help people, and feel I can do so by leveling up and learning as much as I can about classes. I would like to continue writing my blog. I write blogs on running successful guilds and I make YouTube videos, so this is something I have fun with and would like to continue in the future. In the end, even in a game such as wow it is perfectly okay to set goals, yes some may seem tedious or ridiculous to others.

I don’t pvp, I don’t raid. You have no idea how many times I hear “if you dont raid or pvp, then what do YOU do?” as if that is the only thing in the game. I always tell them the same thing, which is what I would like to remind your readers of. “There is more to wow then raiding and pvping. If you’re not having fun raiding or pvping, why do them? You can level up, make gold, farm pets or mounts, or even just help new players…”

“There is more to wow then raiding and pvping. If you’re not having fun raiding or pvping, why do them?”

Never forget where you came from or where you started. I haven’t and it is that experience I use to try to make things just a little better for new players coming in, or long time hiatus players coming back. Never forget your origins in the game, never forget you were once new to. If that means you need to at least guide someone where to go make a few gold pieces, so be it. Its better then ignoring that beggar in your city who just doesn’t know how to make gold.

Thanks Cat, and welcome to the Spectral Tiger Owners Club!

Winterspring - Icy Chill back in game

Giving Back Part 2 | How to Give It Away

Membership of The Gold Queen
1 reply