The Spectral Tiger Owner’s Club is a new column featuring the elite gold makers of World of Warcraft who have bought the expensive Trading Card Game Mount “Spectral Tiger”, either the rare blue, tiger, or the epic purple tiger mount.

Today we have Obeah who will be sharing his success story.

I’m a lifelong gamer, started back with a Commodore 64 PC and an Atari 2600 VCS. As for Warcraft, I’ve played since Feb 2008 – very late TBC, only a few months before Wrath launched. I enjoy dungeons, raiding, and Battlegrounds.

The first Spectral Tiger I saw was in Orgrimmar. I don’t recall who was on it, just that it was early on into playing Warcraft. I just saw this very bright, shiny feline mount that looked awesome. I looked on, clearly thinking, ‘That’s beautiful – but I’ll never have that.’

I did not purchase the Spectral Tiger in-game with gold. I’ll explain upcoming.

Tell me about the day you got your Spectral Tiger, how did it happen?

I got the Spectral Tiger, and Swift Spectral Tiger, as a gift from my wife. She was, and is, the reason I started playing Warcraft. She did a trial account in Jan 2008, I joined her live Feb 2008 when she went to a full subscription. As for the day I received the gift, she had two of the loot cards in hand, and gave me one for my toons, keeping one for herself. I was very happy, as was she.

Most people buy their tiger with gold. You didn’t? Do you still make gold?

No, I didn’t buy the Tiger with gold in-game. I was lucky enough to get it as a gift from my wife, who is a lifelong gamer as well. As for making gold, I definitely work on making what I can. Supporting characters over 4 realms (2 sets of 2 merged realms) on 2 different factions requires a nice chunk of gold to survive, much less live comfortably. I have 10 characters at level 90 plus, with 4 at current level cap (100) and somewhere around 35 to 40 overall toons. In the past few months, since release of patch 6.2, I’ve made over 100k gold selling Medallion of the Legion via the AH.

How long do you think it would take you to save up for the Spectral Tiger, just from making gold?

How long it would take, for me, is very different now than it would have been a few years ago. If I had products as in-demand/big-ticket as Medallion of the Legion have been, a few months of just selling those would make the gold to buy a Spectral Tiger. (I also had a very demanding job for the first 4 years I played Warcraft, working long shifts under contract for a big-name movie distribution company.) 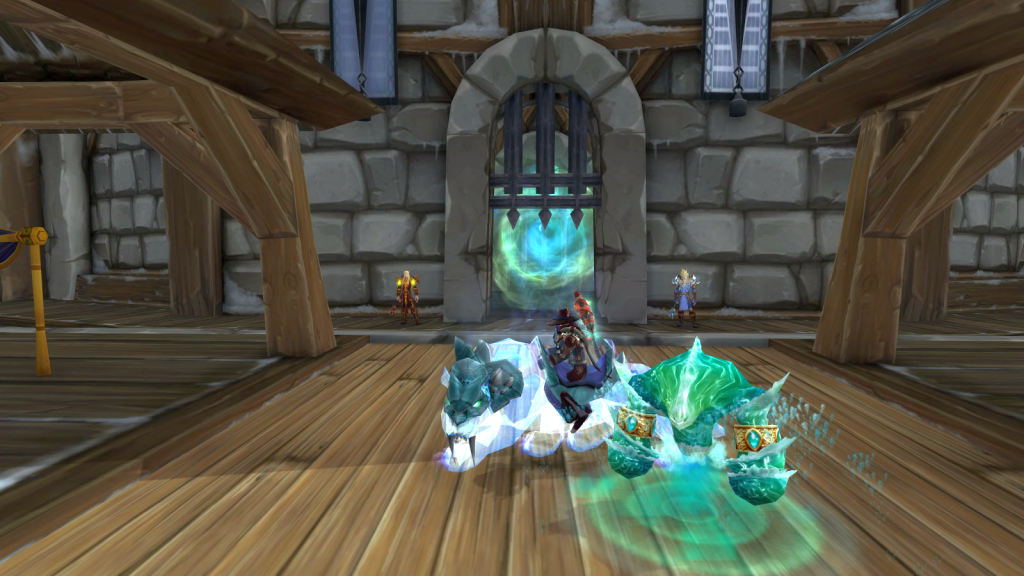 In terms of addons, I use: Postal, The Undermine Journal addon, Auctioneer, and Auctionator. I especially enjoy the ability to automatically check for undercuts that Auctionator provides.

I want to hit gold-cap on my main server by the time Legion is over, if I can manage it. I’d like to own the 300 mount achievement mount (Heavenly Azure Cloud Serpent.) I have 227 mounts currently, so I still have some work to do for that one. As for “status symbol” mounts, I have the Amani Dragonhawk (TCG) and Kor’kron War Wolf (Normal Garrosh AoTC) mounts.

Spectral Tigers are special, for me, because I main Horde characters. In-game, Horde don’t normally get an opportunity at feline mounts. The fact of felines being heavily associated with Alliance, and the unique model, make the mount very sweet to have. After getting the Tiger as a gift from my wife, she and I did laps around Orgrimmar on our new Spectral Tigers,
stopping to roar at passers-by.

Every sale counts, whether it’s 5g or 5k gold. You don’t have to take over a market to make a profit. Making gold is a fine balance of being proactive (farming a route, routine chore-
tasks) and waiting for the right time to post items to take advantage of player habits. Last, but never least, stay hungry to make gold. Having gold in-game is security for your characters, being able to afford whatever needs you may have for them at whatever time you have the need.

Future Plans.. In-game? I’m focusing more on making gold now as we wind down Warlords and approach Legion. Outside of the game, I will continue to campaign for a proper #FlightPlan to be implemented for the Legion expansion. It’s an extension of the campaign I conducted to lobby for reinstating flight for Draenor and future expansions, as #FlightIsImportant to me.

There is a special shout-out I want to give here. Many years ago, when the Trial of the Champion dungeon was first introduced to the game, my wife and I hit a wall within the game. We wanted to progress to do ICC, but not being in a large guild and without many friends playing, we were at a dead-end. Two very awesome people, Steelydan and Gondur, joined us to help us do the dungeon. We got new gear, and were eventually able to progress forward to ICC and beyond. However, that progress, and anything afterward, would not have happened without their help. On behalf of my wife and myself, I thank them. I honestly hope to pass that forward to others in Warcraft; and, I hope others would do the same to help those less fortunate in the game.

Thanks Obeah, and welcome to the Spectral Tiger Owners Club! Giving Back Part 1 | Why Start from Zero?

World of Warcraft - My Gold Snapshot

Fangs of the Father Rush - Profiting from Rogue Rollers

Return to Mists of Pandaria: Treasure Finding for Gold
Scroll to top
This site uses cookies: Find out more.