Players are worried that Inscription changes in Legion will make the profession useless and unprofitable.

Information about the professions in the Warcraft Legion Alpha are still sketchy but we do have a rough idea of what is going to happen.

In general, professions now need you to complete quests for patterns, which you then improve upon as your character matures and grows.

I get the feeling that devs want professions to feel like a side quest to the main quest lines.  They want players out and about in the world, and have taken on board that sitting in a garrison crafting and selling is boring.  But this means that they have done the complete opposite, bringing crafting and professions “into the wild”.  Bad news for those with an army of alts they have rarely played. You’ll have to learn to play them now! 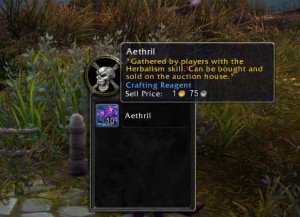 Inscription has always been linked with herbalism, requiring herbs to be milled.  In Legion there continues to be a mass milling ability for the new Legion herbs.  One thing to bear in mind is that herb nodes are lootable by more than one player, if the 2nd/3rd players get to the node quickly enough before it despawns.  This could mean quite a lot of herbs in the market, especially if gold farmers stop derping around in AQ20 and learn to multibox. 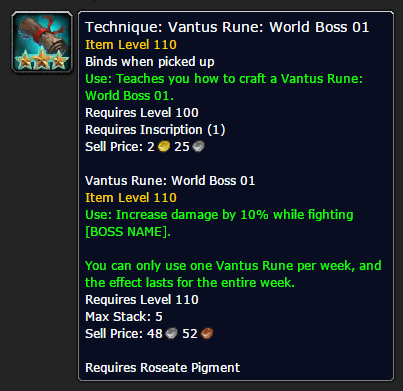 The Vantus Runes are the new inscription creations that can be crafted, similar to scrolls.

It seems that Blizzard wants to move away from Inscription being a craft that creates many, many low profit item, to a profession where you craft a medium amount of medium price items.  They did something similar with Jewelcrafting back in Warlords of Draenor.  However, in Legion, the crafting mats will not be held back behind time-gated BoP crafted materials, instead they want players to pursue crafting items from level 1 to level 3 in each technique.

Vantus Runes are a new craftable item. The placeholder says that it allows the user to increase the damage against a world boss, but can only use one rune per week.  I would guess that this will require careful organising in guilds that aim at the top raiding.  For players who focus on top gold making instead, we will want to learn how to create these, and be the fastest to get them on the AH with the lowest cost of materials.  I will continue to research in Legion Alpha for you all.

These are going away in Legion!  Instead of Glyphs being a psuedo talent tree of their own, a minor glyph is now a tome, and once learned, it will be learned forever, no need to choose between minor glyphs like the current system.  It will be applied directly to a spell in a players spellbook instead.  Expect pruning of all glyph making!

Players are worried about the future of Legion inscription profession.

However, once those super cheap glyphs have sold we find a new opportunity.

Some of the glyphs have no competition at all.

Some of the glyphs can actually be sold at pretty good prices right now.

Strange as that may seem!  I’m selling glyphs at 3 times their previous prices, just because all the other competitors have fled the market.

I dont know if this might be the case on your server, but I would caution you against unlearning your Inscription profession.

If you know how to quickly make glyphs, using Trade Skill Master 3, then you can near-automate the process and produce them in an efficient manner.

I have a 5 part guide on making glyphs with TSM here.

Other profits with Inscription

Glyphs are not the only thing you can craft and sell with inscription.  Certificates of ownership, kite pets and shoulder enchants continue to be profitable, bringing me hundreds of gold profit each sale, so check out the material costs and sales prices of these items on your own server. 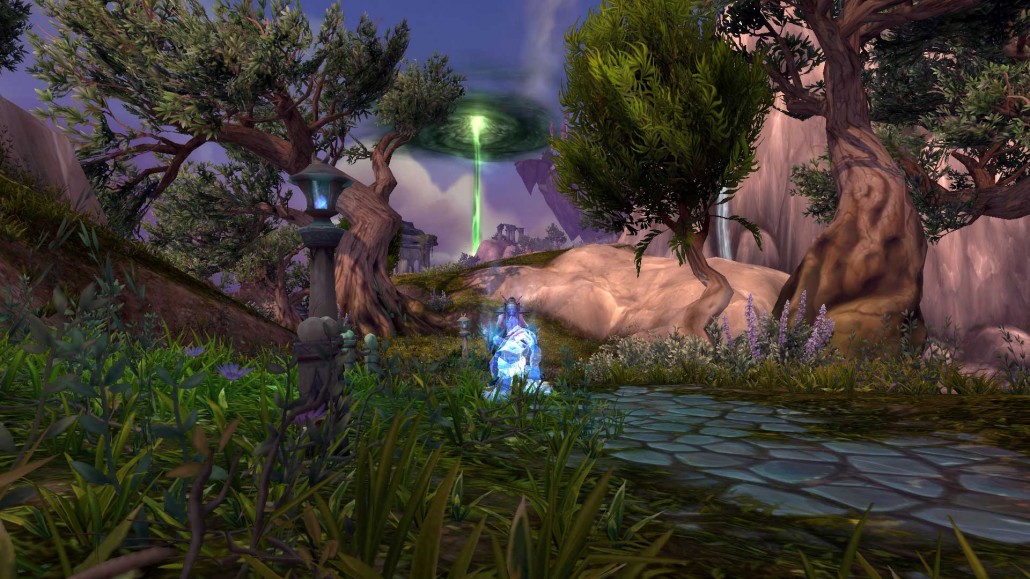 The reason why I’m posting less on The Gold Queen at the moment is because I’m working hard on creating a brand new professional Gold Guide (even deathwing is jealous lol) based on all my years of experience. You can get in on this, and watch the guide being created by the ground up by supporting me over at Patreon.  I fully intend to continue to write The Gold Queen blog, however, the man hours required in order to create such a huge guide are a drain on my free time right now.  Once the guide is up and running I hope to continue to write more blog posts for you here and even continue with my livestreaming and podcast segments! 101 Gold Guides that Still Work in 2016
Scroll to top
This site uses cookies: Find out more.