This is a simple addon that tracks the amount of herbal loot gathered by each player in the group, including herbs, seeds, even blood of sargeras.

Old MacDonald was written for people who want a basic addon to track herbed materials. The idea came from forming seed parties and wanting to split the fox droppings evenly; there was no way to tell who was being honest about how much they looted.  And so came this simple counter addon that tracks the following loot:

The Guild Herb raid is a nice social event, probably best scheduled before or after a raid, so that all the herbalists in the guild can farm the herb route together for crafting alchemy flasks for raiders.

Let the most experienced herbalist be the leader, he or she will know the best routes.

Keeping the herbalist raid short will encourage players to return for the next time. So will rewarding players with a flask or two for at raid time.

Extend the invitation to raiders with herbalist alts over level 100.

Even level 101s can farm Starlight Rose, especially in a pack of 10 players, the rest being a higher level.  Grab gatherer or gathermate2, to check nodes and share node spawns (when herbs grow, or appear, on the ground).

Run together in an organised route, rather than each finding their own separate way. Otherwise, there is a tendency for players to shout “I FOUND ONE!” and everyone to gallop to that position, only to miss out on the spawn due to timing, and not everyone getting the maximum amount of loot from each node spawn.

Feasibly you could also do this for ore farming, as this also has shareable loot. However there is a lot less call for lumps of metal by raiders than there is for flasks!

This is part 1 of a 2 part series in Social Herbing.  Next blog guide:  Seed Raid Farming 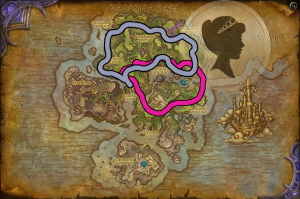