Pyrite Ore life for me 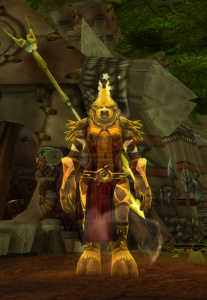 Pyrite is one of those ‘forgotten’ ores that players collected during the Cataclysm expansion.
Found in the same places as Elementium deposits it was the ‘rare’ mining item during the expansion

Where to find Pyrite Ore

There are two routes that are commonly used to collect both Elementium ore as well as Pyrite Ore.   Clearing out an area of the Elementium ore will spawn the Pyrite ore deposits that you are looking for.

The first route is found in the Twilight Highlands area 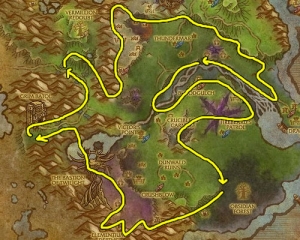 Most of the route will take you to the mountain edges of the zone.    If you have a combined miner/herbalist you can obtain some extra income from the herbs picked.

The second route takes you to Uldum 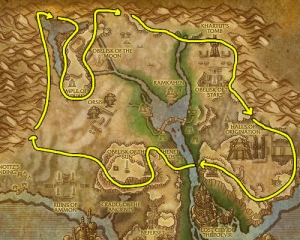 This again puts you around the edges of the zone into the mountain areas.   The deposits do spawn in the middle of the zone but staying on a set path can allow you to pick up the respawn quicker. 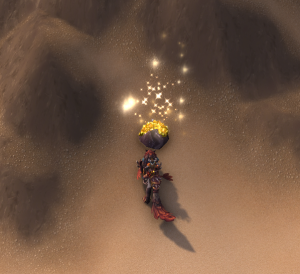 Profit production for your Pyrite Ore and Volatiles.

With the mining profession, you have the ability to make your collected Pyrite Ore 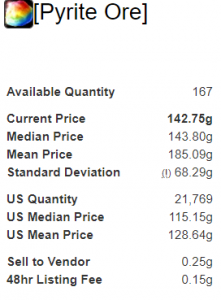 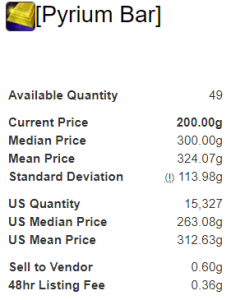 Pyrium bars by themselves can be used by Blacksmiths to craft armor enhancements.   But they have a limited use (based on gear level).
But the special use for Pyrium bars is selling them to alchemists for a Truegold Transmute.

The four different Volatiles (Fire, Air, Water, Earth) are used in multiple professions.   Many of the popular Cataclysm transmog gear use them for crafting.

Blacksmiths have three items that they can craft using Pyrium Bars 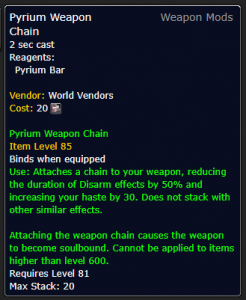 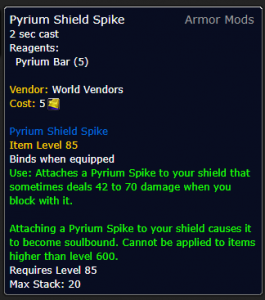 All of these were very useful during the Cataclysm expansion.   With the ilvl limitations put on them, they are in less demand now 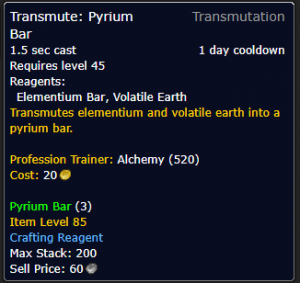 Alchemists get the biggest benefits from Pyrium bars.  Combined with three of the four volatiles that is gathered via mining

The first transmute that Alchemists is to transmute Elementium bars into Pyrium bars.

Be warned with this transmute has a daily cooldown.   Originally it was linked with the Truegold cooldown but
they are now separated.

By itself, this is a valuable item to have in your rotation on the Auction House for sale.   Especially since it is used
by Blacksmithing,  Engineering, and Jewelcrafting

For explosive profits,  Alchemists use this for their crafted mount which is in heavy demand. 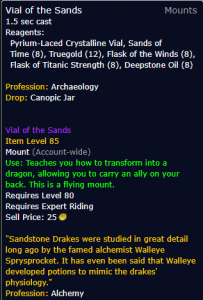 Alchemists with the Vial of the Sands recipe can keep making this craft on a regular basis.   All of the materials that are needed are
either crafted or purchasable by the alchemist profession.   The only item that is needed that isn’t producible by the Alchemist is
the pyrium bars.

Keep in mind that many of the items have a set cost (Sands of Time at 3000g) while others are based on how much you either farm for yourself
or purchase from the AH.

At a profit of between 20,000 to 40,000 depending on how you obtain the ingredients, you end up with a very nice tidy profit.   The longer that we get away
from an expansion,  the more opportunities of these being on a limited supply basis.

Gathering old world materials and crafting has always been a staple for gold making success.   Pyrium ore mining is one of the best examples of taking a long forgotten item and making it into golden profits.

Five Things To Do Before Battle For Azeroth Pre-patch

What To Plant At Halfhill Farm
Scroll to top
This site uses cookies: Find out more.