Five Legion Foods to Cook for Battle for Azeroth

Every expansion there are cooking items that carry all the way through the expansion.

Items that boost stats,  that give speed enhancements and even do enjoyable effects to your character.

Won’t These Legion Foods Be Outdated in Battle for Azeroth?

Gold Queen says “Leveling cooking in Battle for Azeroth is going to be super simple, and give you better buffs.  But until the materials are in high supply, and you’ve learned all the recipes, they’re going to be expensive, and a pain in the butt to farm.  Get ahead of the curve selling old Legion food, preparing now, selling at BfA launch, and you’ll ease yourself into the new cooking market as the supply increases of the new cooking ingredients.

Nomi is a Burning Fool 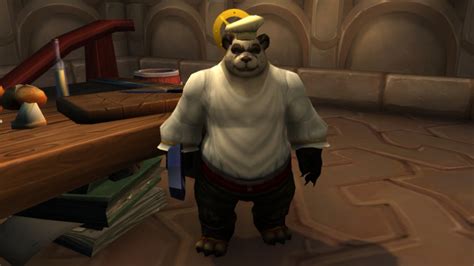 If you did any cooking leveling with Warcraft Legion you got to meet the Fire-Mage-turned-Cook named Nomi.

First introduced as an apprentice cook during World of Warcraft: Mists of Pandaria he seemed to have opened up his own restaurant in Dalaran.

In the beginning, it seemed that Nomi the cook burnt everything.   But later he must have decided to take correspondent courses from Gordon Ramsey because our fire inspired cook began to cook more and more items with less and less gasoline.

They can give you the edge when doing quests and going from Enemy to Enemy.  Making the downtime to recover be less and less.

Time to Bring the Food From the Kitchen to the Outdoors 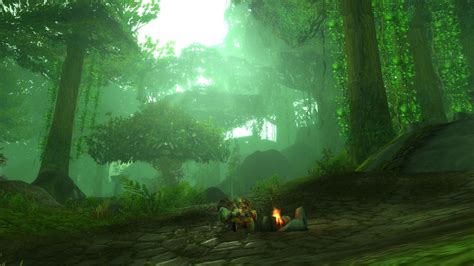 Demand, easy to make and personal use.

This is why knowing what can be cooked even on one character and placed on the AH will become very important.

Many old professions (including cooking) get ignored for the new shiny profession items.  So if you can prepare or already prepare specific items you can boost a players ability to level faster. 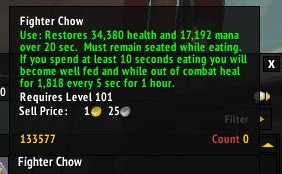 This was a popular item to have with when leveling during Legion.

The 400% increase in regeneration allowed you to have little downtime between quests and mobs.   This was especially effective for classes with little or no self-healing ability out of combat.
(edit:  this was changed after this article was published to become a flat 1818 heal every 5 sec when out of combat) 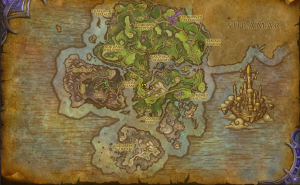 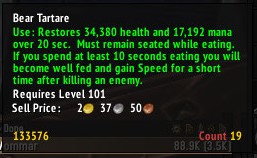 This is a recipe that drops from random mobs in Stormheim.

With the changes in Cooking with Battle For Azeroth if you haven’t already learned Legion cooking then you will need to start the learning process before it drops.

The buff itself gives you a nice sprint effect that makes ‘kill’ quests go by faster.

The estimated speed boost is similar to the boost that a rogue has access too every 30 seconds. 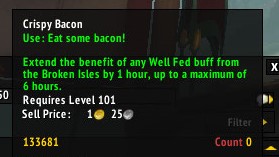 Who doesn’t like Bacon?  In this case, Crispy Bacon extends any benefit from a Broken Isles for an additional hour.    This includes all of the buffs that are given from the different crafted foods in Legion.   Can be handy if the materials are found cheaply on the AH.

You obtain this quest by having Nomi experiment with bacon at his Test Kitchen. 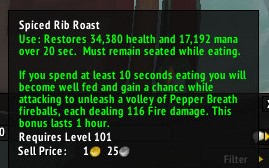 Spiced Rib Roast is for the player who likes to have firepower in their questing.

This can allow you to kill mobs faster and get your quests to turn in much quicker.

Deep Fried Mossgill (or other plus stat foods)

There were five ‘stat’ foods that were available during legion.    Each of these added a large boost to a single stat for a player.  With the changes coming in BFA as far as stats as well as mobs continuing to scale with your level any advantage is a good advantage.

For each stat Advantage, you would need

How to market your leveling ‘booster’ pack

With the opening of an expansion, there is always a race to get to the maximum character level as possible. This is where your knowledge is going to come in handy.

Many players won’t know the advantage of having leveling food and stat food in their packs. Keeping players well supplied with food on the AH will allow you to a steady profit dropping into your bags.

Also keeping stacks of these in your guild bank will give your guildmates the same advantage that you have as you are stocked up and ready to go.

Try this trick in Trade Chat

Patience is a Virtue
Scroll to top
This site uses cookies: Find out more.