In the first of two major announcements, Blizzard mentioned that they want to drop the 25 dailies per day cap.

In Mists of Pandaria you will be able to do as many daily quests as you like.

Once a daily has been completed, it’s done for the day.

There aren’t unlimited quests, you can’t get tomorrow’s daily quest.  But you can do more than 25 of them.

So you can do all the argent tournament ones plus all your professions dailies, plus all the Tillers and Anglers dailies. Plus all the Halfhill Market and all the other “hundreds of new quests” in Townlong Steppes and the Dread Wastes.

And with repect to Hyperbole and a Half 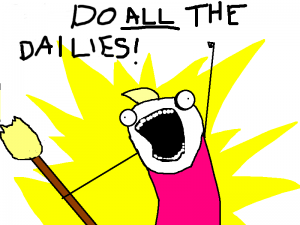 Wow, does that mean the best head enchants will be from Cata reputation factions? Or do they simply disappear?

I see lots of shouts of “give it to Engineers instead!” so we’ll keep an eye on that.

Shoulder enchants can now be provided by scribes

As if scribes (not inscriptionist!) didn’t have enough OP powers of gold making already! This puts the top 3 gold making professions in Pandaria as

On a completely unrelated topic, Andy Wrynn is a naughty wee fella, isn’t he. We Need To Talk About Inscription
3 replies

Thank You
Scroll to top
This site uses cookies: Find out more.