BRD will make you rich. Blackrock depths was one of my favourite instances in vanilla original World of Warcraft. My English “Blitz spirit” or +stamina meant that I could go the whole distance through to Emperor Thaurrissan and the old Jailbreak alliance Onyxia attunement run. In WOTLK, BRD was a favourite of engineers who needed Schematic Field Repairbot 74A (found on the floor near the boss in the golem foundry) in order to progress to making Jeeves repair bot. Cataclysm found BRD taking a decline in interest as gold gamers parked characters in front of the AH npcs without moving, concentrating on arbitrage, shuffling and flipping.

As well as the repairbot schematic, other engineering schematics drop from mobs throughout the zone. World Enlarger, Gnomish Alarm-O-bot, Dark Iron Rifle and Goblin Jumper Cables.

A resellable pattern. Buy for 30s from Yuka Screw Spigot just inside the entrance, and sell for 20-30g on the Auction House.

Plugger drops some greens and useful stuff when you kill him, but before you do, please clear out his inventory.

Thorium Brotherhood guy in Grim Guzzler BRD will sell you a sulfuron hammer pattern in return for a sulfuron ingot (drops from golemag the destroyer in Molten Core).  The patterns can be sold on AH for between 3-5,000g depending on your tenacity. If your character is a blacksmith, you can sell the actual crafted item for anything up to 50k.

The Behemoth patrols the grinding quarry in front of BRD entrance. He drops Vilerend Slicer which sells for about 30-40g at the moment. Slap him on the way into BRD.

Lost in the Depths?

Blackrock Depths was difficult to navigate, and was especially so for me as someone who still gets lost in the cave-of-dailies in Deepholm.  Blizzard now gives you an instance map.  However, I found that this flowchart map of Blackrock Depths used at wowwiki was much simpler to understand. 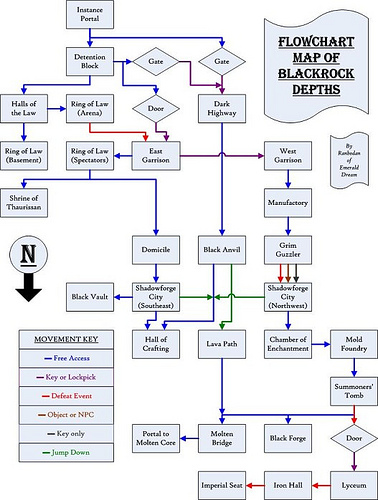 I hope you will take some time to visit BRD today and make some profit.  BRD can also be a relaxing place as a solo level 85, after the hustle and bustle of the AH and Cataclysm zones, so give it a try today. Fun and Fireworks in New Dalaran

Dalaran reopens portals to Stormwind and Orgrimmar in 4.1

Gold With Your Guild | Markets and Bank
5 replies

Make Heartblossom While the Sun Shines