Hey Guys today I have done something different and exchanged posts with a few of my fellow bloggers as part of “Gimp’s Golden Circle”, and Gimp has brought us a post from his blog over at Gimp’s Gold.  If you wish to read my post for today, you can check it out over on Flux’s Blog over at Power Word: Gold

Hey Guys I’m Gimp from www.GimpsGold.com and today I wanna talk to you all about making gold by running your favourite dungeons. I have recorded a video of me speed running some of my favourite dungeons as an example

Often when we think of dungeons from a gold perspective we think of farming greens or cloth, or even boosting people for gold in some cases. However many dungeons in game have items players have completely neglected or just don’t think of anymore. I decided to speed run a few dungeons to look at some old and forgotten items, or ways to speed through REALLY fast. During the runs I intentionally went for speed, so didn’t necessarily kill every single mob or boss but the dungeons can also be run slowly for more loot per run, but I personally like doing dungeons fast!

Hellfire Ramparts  is a great instance for  Runecloth and Netherweave cloth, as well as level 60-73 greens, but the best part of Ramparts is the speed in which you can run it.

Loot after an average run.

Gnomeregan is probably known as a rather long and sometimes annoying instance. However if you split it into a couple of pulls like I do, it allows for a faster more simplex run.

The items that make me run Gnomeregan the most are the Fused Wiring that many of the mechanical mobs drop. However Gnomeregan’s true calling for forgotten and unthought-of items is its vast array of great Engineering Recipes.

Some of the recipes available are 100% exclusive to the dungeon:

Some are available as drops but can be found outside of Gnomeregan also:

Although most of the schematics themselves are not BOE the items they create are often very desirable and worth obtaining the means of creating.

Loot from a single Speed run

Scarlet Monastery is an amazing dungeon with a ton of cloth dropping Humanoids. The biggest plus to SM however is the speed in which you can complete its highest level area the Cathedral.

A full cathedral clear can take from 2-5 mins with only the need to hit 1 mob to agro the entire instance!

With mogging around the corner [“Transmogrification/Mogging” – the Gold Queen] SM has gained a new plus for gold making other than pure speed running for cloth and that is the Chain of The Scarlet Crusade set, which comprises of:

With all parts of the set apart from the leggings being bind on equip the potential for sales once Mogging is released could be incredibly high. (Watch for these also cheap on the AH)

Stratholme Human Side (Scarlet Side)

Stratholme is the ultimate speed dungeon, with tons of mobs, tons of cloth and my favourite items for selling in any old world dungeon!

For those who don’t know Righteous Orbs are used as part of the Crusader Enchant which is incredibly popular for heirloom weapons, especially for Warriors and therefore profitable!

During my run I obtained 4 of these orbs each netting me 100g on my server!

Combine this with 111 Mageweave and a very fast run can become very profitable! 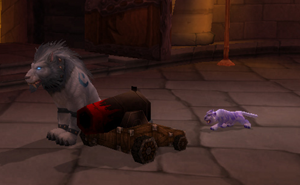 So I have listed a Super-fast fun dungeon (Hellfire Ramparts), an Engineers haven for recipes (Gnomeregan), a Mogging potential dungeon (Scarlet Monastery), and a dungeon run hunting for specific materials (Straholme). But Azeroth has many many other dungeons with potential items and reason to run them for gold, have a look at your favourite dungeon and see if you can find an item people would think of when they think gold making!

So take care Guys and Gals and keep an eye out for more dungeon run videos coming soon! How to make WoW Gold with a startup toon
10 replies

World of Warcraft Gold Cap Lifted? Day in the Glamorous Life of a Warcraft Gold Blogger
Scroll to top
This site uses cookies: Find out more.