Today’s TGQ is a guest post by Vittoriya.  She shares her tips and expertise for running Cataclysm 25 man raids, and the amount of gold you can make.  I’ll hand over to Vittoriya now:

If there’s one thing that The Gold Queen has taught me, it’s that there are many, many different ways to make gold in World of Warcraft. By far my favorite way–and probably one of the easiest, fastest, and more reliable ways–is farming old raids, specifically the Cataclysm 25 Heroics. It’s reliable, because you’ll automatically get around 8,000 gold per week from bosses and from vendoring BoPs. Then, if you do like to play the auction house a little bit, there’s a chance at much, much more, as there are BoEs and crafting patterns with fairly high droprates that you can turn around and sell.

First off, I highly recommend that if you’re going to take up farming raids for profit, you invest in a Traveler’s Tundra Mammoth. If you’re like me, your bags are constantly filling up, and this is just a quick way to vendor all of those soulbound items in your bags, get your gold, and continue on farming. It saves you having to leave the instance and fly to a town and sell things, which in turn saves you time. And I’m all about making as much gold as I can in as little time as possible, because I have other commitments like raids and guild activities and real life.

Now let’s take a look at the actual raids themselves. I’m not going to go into the specifics of boss mechanics in this article, but if you do need help with that for some reason, please feel free to check out my website, SoloingWoW.com. For now, though, we’ll just stick with the gold-making aspect of Cata raids, because that’s why everyone is here.

I timed all of these on my alt hunter, ilvl 689, to give an average level 100 with some Tanaan gear would experience. Your times and exact amounts will of course vary, but this will give you some idea of what to expect. All of the times listed INCLUDE travel time to the instance. You can use TSM or wowuction.com to find the auction values of greens, epics, and patterns that you loot along the way, to decide if you should auction them, or vendor them.

There are 6 Cata raids in total: Baradin Hold, Blackwing Descent, Dragon Soul, Firelands, The Bastion of Twilight, and Throne of the Four Winds. Let’s take a look at them each individually. Keep in mind that these numbers will always vary, but you’ll get a good idea here of what you could potentially make off these raids: 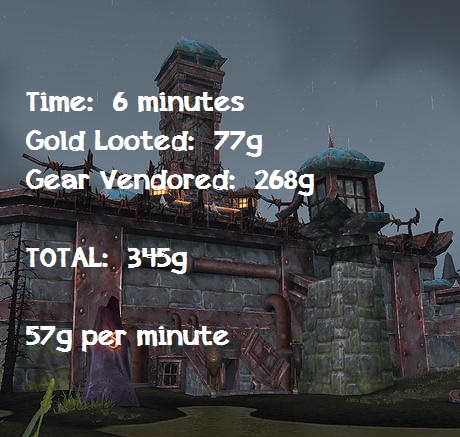 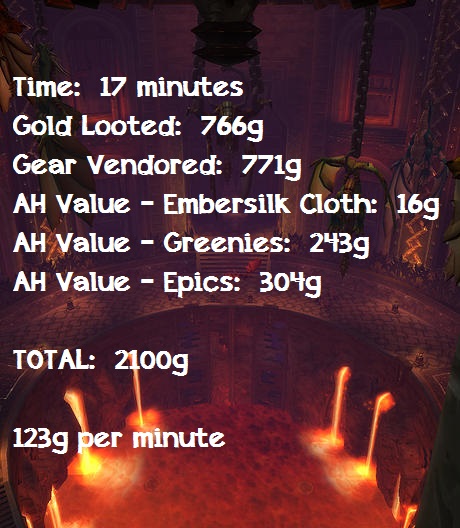 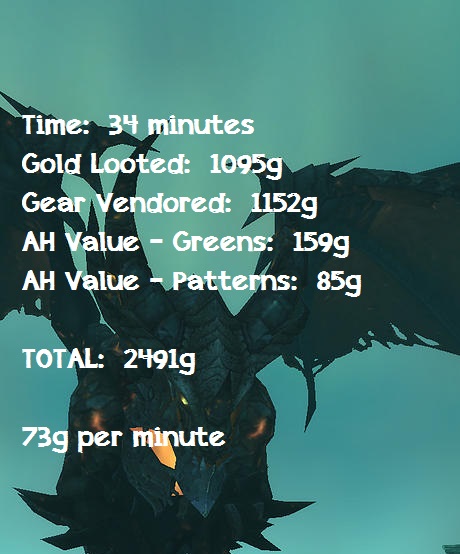 ​*As you can see, I got EXTREMELY lucky with a very rare and valuable BoE drop during this run, a rare enchanting pattern, and another greenie that was also worth a lot. So this number is super high, but you can expect something more like 1750g-2000g on an average run. This just goes to show though, that sometimes you can get lucky and hit the jackpot.

Throne of the Four Winds

So totalling everything up, that means I had a lucky week and have the potential to make 21,366g from Cata 25 Heroics, if everything sells on the auction house. Even with JUST the gold looted and gear vendored, I made 7,882g in about an hour and 45 minutes, once per week.

If that sounds like a good return for your time, then I’d encourage you to also check out soloing these raids for profit. I have a good feeling that your banker will thank you. 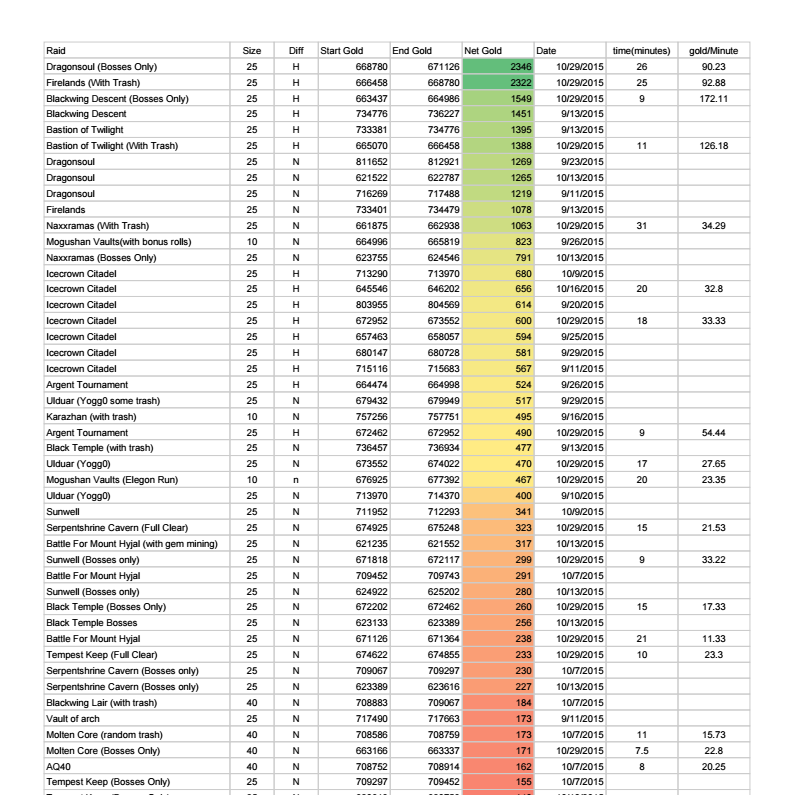 If your character is a tailor, the embersilk drops will increase.  Craft embersilk into Deathsilk Cowls, and send them to your disenchanter. Each cowl takes 3 embersilk bolts + 2 eternium threads to craft, and disenchants into 1-8 hypnotic dust. They Don’t Sell On My Server
Scroll to top
This site uses cookies: Find out more.