During Warlords of Draenor, “super squirt” was the codewords whispered between gold makers, which meant that there was a rare event that allowed players to quickly level up battle pets. A garrison menagerie visitor, led by a child called ‘Squirt’ gave super fast pet leveling.

As you may know, battle pets at level 25 sell for more gold than brand new level 1 pets.

In Legion, the codeword is “Andurs” and you will be battling Mini Musken.  The battle is even faster than Squirt in Warlords of Draenor!

The only drawback is that this is an irregular random event and you must watch out for it on your daily World Quest list.

UPDATE THIS METHOD HAS NOW BEEN NERFED. LEFT ON WEBSITE FOR ARCHIVING

The battle was discovered by XuFu’s pets, my favourite pet battle website. 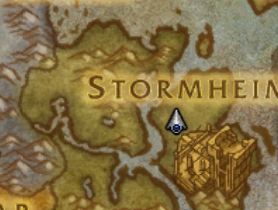 Totally ignore Rydyr, and talk to Andurs to start a pet battle.

After the battle with Andurs DO NOT TALK TO RYDYR.  Talk again to Andurs and ask to battle him.

Under no circumstances talk to Rydyr

Repeat the battle with another set of low level pets, or continue leveling your current pets to 25. It takes 5-6 battles 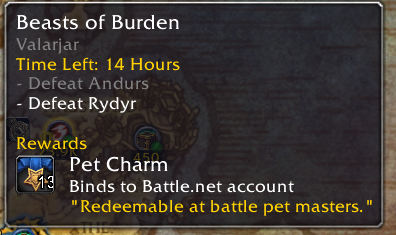 Thank you once again to XuFu’s Pet Battles!

Once your cageable pets are level 25, sell them on the Auction House.  Here is my favourite site for battle pet prices. 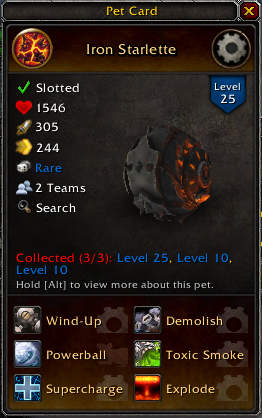 Iron Starlette – the star of the show