My real name is Alyzande, you can call me Sandy.

I’ve been writing TGQ since 2010 and realised that most of you don’t know much about me.

I got the name “The Gold Queen” after a funny conversation with my youngest son.  Earlier in the day, I had discovered that the economy on Silvermoon EU(A) on that day was worth 16 million gold and that I owned 4 million gold worth of the auctions.  I was explaining to him what I had been doing that day and he said “omg, you’re like the Queen of Gold, mummy!”  And I loved that name and took it for my gold blog.  That was over five years ago now!

When people hear I am “The Gold Queen” sometimes they think I am extremely arrogant, and fail to grasp the subtle humour in the name.

I have two children, both boys, and split up from their father many years ago.  He was a hunter. A hunter with terrible dps. You understand, right? 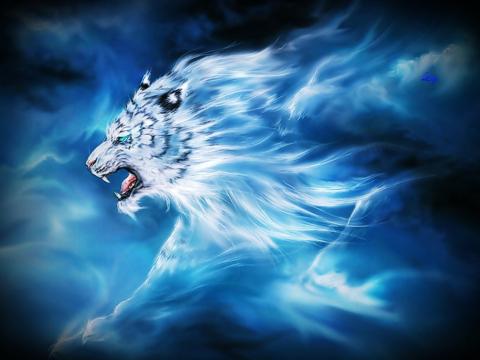 I never thought I’d own a spectral tiger. Before account-wide mounts, these babies were rare as hen’s teeth. I once bid on a Spectral Tiger and while I was nervously looking at the “confirm bid” button, someone else bought it out from under my nose!

I RP.  I enjoy roleplay and look at it as acting.  Acting without any pay, and without any script. It can be incredibly fun, especially if you RP extreme characters.  My two most fun characters were a brainless sexist paladin who was rolling in money. He used to pat the backsides of ladies without permission and then run around screaming about “LESBEANS!” when the lady, quite rightly, was not amused by this. The other fun character was a dimwitted, hot tempered scarlet crusade missionary, back in Vanilla.  She once knocked herself unconscious banging her head against the wall throwing a tantrum in the Cathedral.  So very silly.

I swear like a champ irl, but try and keep it clean on the blog.  I have a very wide vocabulary, being a voracious reader, and like to use lots of words, including the rude ones. Sometimes the rude ones are the best ones for the situation.

I’m 42. Yeah, you read that right. I’m careful about which photos are allowed on the internet.  I started playing when I was 32 and playing computer games with 20-somethings seemed ok.  Now I’m 42 trying to tell 16 year olds to stop chuckling about rape in trade chat. Yeah, things have changed. 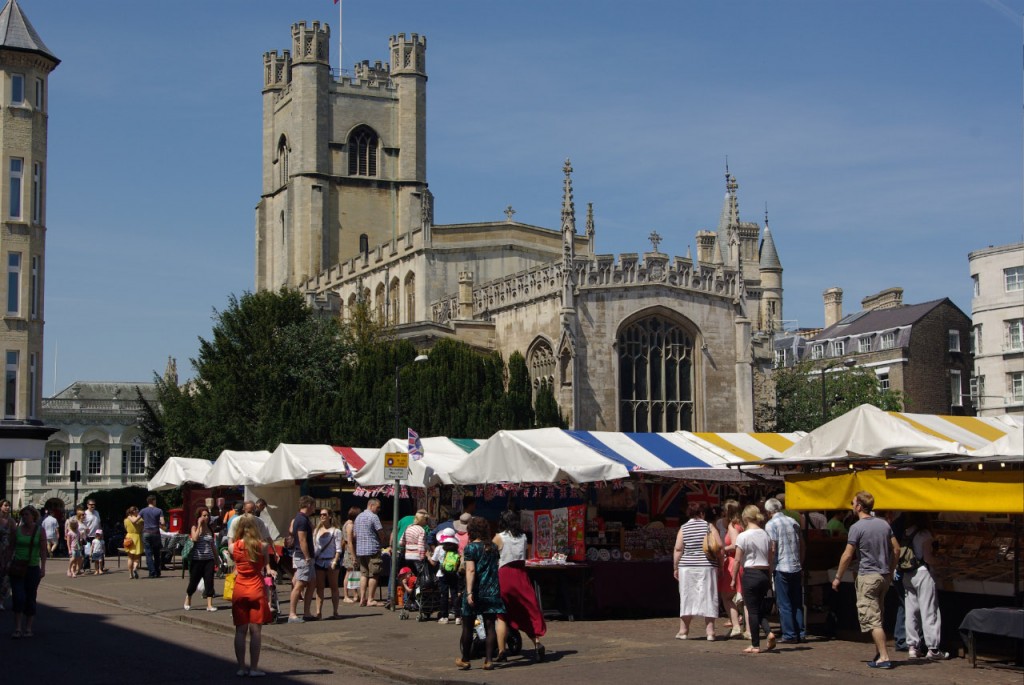 I studied Business and Management at uni in Oxford. The course was not as much fun as being a university student in a busy student town. mmm, dem memories.

If I’m out on the town, I’ll drink pints of cider, but if I’m at home, it’s spirits and mixers for me. Usually a bourbon and pepsi.

My main character is a feral druid, and it was the same character I rolled back in 2005 when I started playing Warcraft on Bronzebeard EU.  I once led the largest guild on Bronzebeard. Shoutout to <The Pie Club>.

I’ve had a stalker who discovered me on WoW. He decided that because I was 1) female and 2) in Goldshire on a RP server, that I was up for some ERP (cyber sex) and when I said no thank you, a certain someone got pissy and decided to follow me around in game, discover my personal info and share it with others, DDOS me and attempt to hack my linkedin, twitter, facebook, and more. Because I have children, and because it’s just wrong to be a stalker, I went to the police in 2014. Blizzard banned his account since then, but he still follows me on twitch and twitter. He’s only young, and has an absent father, and some mental health issues, so I do not name him or approach him.

I’m pretty sad that my IRL situation (full time 24/7 Carer) and my slowing fine motor skills mean that I’m slipping further and further down the DPS charts, and I’m grateful for the guys who permit me to tag along and fill up their roster/s.  In a way, that means I have to focus more and more on Gold Queening.  If that’s even a verb? 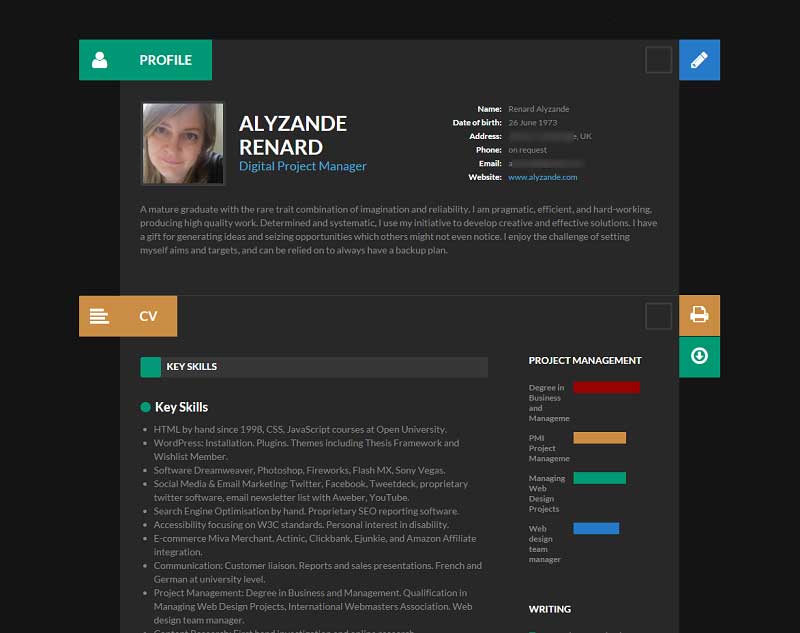 What drives me, asks Jay on twitter.  Strangely, it is not success, it’s not “having the most gold ever”. Because at the end of the day, gold is just gold is just gold.  It’s finding new and exciting ways to make gold.  Making gold when others could not, finding amazing items to resell, finding new ways to play, and to win.  Bending the rules, but never breaking them.

Which countries would I like to visit?  I have come to accept that with my real life situation, that it is difficult enough for me to travel inside my own country, and leaving the country is almost impossible.  If I can arrange *good* childcare, then I occasionally fly out to other countries to spend time with other WoW players.  My favourite visit was to Sweden, although wow it was cold.

I consider myself generous.  I don’t really do giveaways on twitch or twitter, but if I discover that it is someone’s birthday, I may randomly decide to give them a gift.  Or I might just give random strangers a bunch of gold because why the hell not. 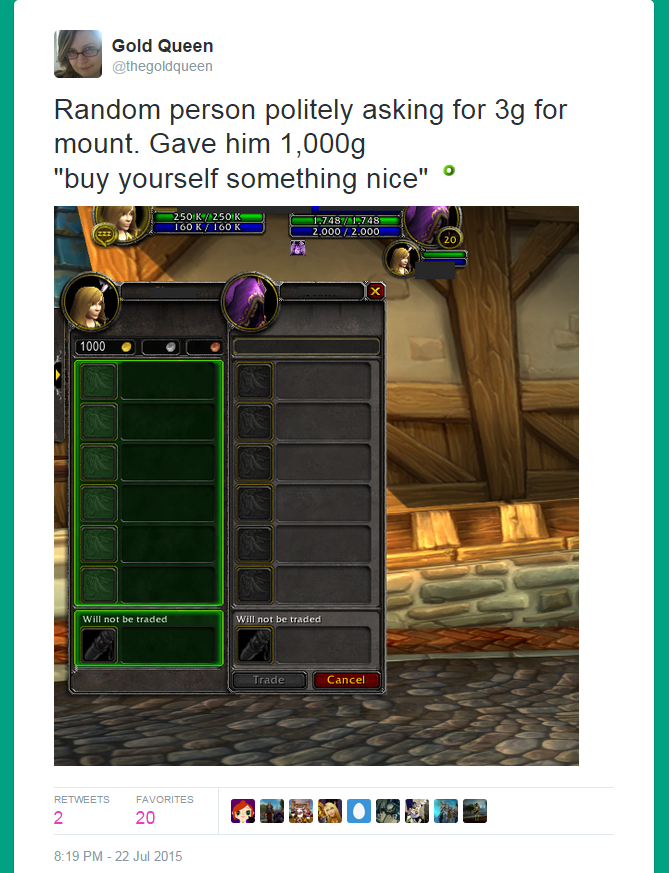 Now, see, I opened my heart to you on the interwebs.  Here are some PHOTOS btw.  If you want to get to know me more, and maybe even experience some of that awesome swearing and cursing I told you about, you can come chat to me on twitter @thegoldqueen.

Next blog post:  Back to World of Warcraft gold making tips.