Hello I’m Lynnora and I stumbled upon the Gold Queen [I was playing my bank alt in the Exodar – TGQ] near the mailbox shortly after transferring my toons to another server. Since competition can best be kept a friend, we have since shared many ideas with one another.

I’ve been playing Warcraft for over six years now, and mathematics and scheming have always been my greater talents. A pizza never tastes as good as when you just culled your competition!

With just limited playtime, I tend to spend most of my online time within the Auction House, finding and searching for bargains, and trying to punch my fellow competitors knock-out.

In this guest post, which I’m honored to be asked to write, I will share some Pet Selling Secrets with you that you may not have thought of yet!

Though your own faction’s pets may be selling on your Auction House, think of dealing with the enemy: the Horde’s pets sell for more on the Alliance Auction House and vice versa. This does however require you to use two accounts as I do, or a friend that may be willing to get your pets off the Neutral Auction House as you can not bid or buyout your own auctions.

Especially now Wrath of the Lich King has come to an end and barely any players are farming the Argent Tournament dailies, they have become overly rare and unique.

For 40 Champion’s Seals each, you can choose from the following Alliance pets:

And for the Horde, you can choose any of the following:

For both factions, the Shimmering Wyrmling is purchasable at exalted reputation with either the Silver Covenant or the Sunreavers. 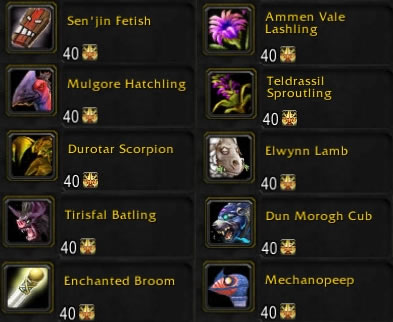 Purchasing these pets however, does require you to play out the whole of the Tournament and gain enough reputation to do so, making these pets hard enough to obtain to place them high on the Auction House price list.  Possibly too time-consuming if your character has not seen the Tournament yet or did not play during late WotLK, but if your Tournament-toon is standing idly gathering dust in Dalaran still, perhaps you now found a job for him!

Another option is to swap out these pets between factions through the Cross Alliance Auction House. However, this requires help of a friend or a second account.

I have been selling the Horde pets for approximately 5000 gold on the Alliance Auction House and though they rarely sell, when they do, I do a little dance in front of my computer. The further we move from the Wrath of the Lich King era, the more these will become worth in value.

As with all not-so-commonly sold and known items, put a small add on the Trade Channel, announcing that you are selling these pets on the Auction House. Make your product known, wanted, and expand your market!

Since patch 3.3.3 engineers, regardless of specialization, can learn both the schematics of Lil’ Smoky and the Pet Bombling, respectively dropped by a trash mob named Arcane Nullifier X-21 and the boss Mekgineer Thermaplugg in the oh-so dreaded dungeon Gnomeregan.

These still sell for quite a dime on most servers and though the list of materials is long, making them per 10 and stacking them in your guild bank is not much work once or twice a month.

In Cataclysm, two new pets were implemented for Gnomish and Goblin Engineers, however, at the moment as the prices of materials are still quite high early on in the expansion, they seem little to not profitable.

The Source of the Stormspire

In Burning Crusade, an exotic creature vendor was placed in the beautiful Stormspire, in Netherstorm. Dealer Rashaad sells pets mostly already known to us, but with a just slightly different coloring scheme or skin.

They sell well on the Auction House, and if you park a toon in the Stormspire, or wage a monthly trip to Netherstorm, supply isn’t all that difficult.

How many auctions do you have every day on World of Warcraft?