Shall I bring the Gold Queen back?

Hey, I miss you.  I wondered if you might be missing me too.

I’ve been quietly playing WoW since Jan 2013, pugging alone then finding a guild, fiddling with the WoW auction houses and then unable to resist the urge to own them.  I’ve been leveling up alts, building garrisons, ensuring all my professions work with each other.  I did my usual new expansion trick of spending all my gold before the end of the expansion, starting from zero and racing myself to gold cap again.

It’s been a while since I was in a good raid guild, and I seem to have found myself one, a comfortable friendly place.

Update on my life

My son still has autism, he will be on the spectrum for the rest of his life.  It’s been one heck of a journey as I discovered more about it and how to help make his life less difficult. But life is more settled now as he grows up and the routines are in place, and I have learned to preempt difficult situations.

Rape. Good news: my attackers were found guilty and sentenced on 20th June 2014.  Finally had the paperwork come through from abroad. I found it hard to explain at the time that the reason I was in hospital was not because of physical wounds (although there were some ofc) but mostly because of mental distress.  You can google for ‘rape trauma’ if you want to know about it. Today I continue to suffer from insomnia, and heightened startle reflex. For some reason I’ve become afraid of night time. Healing is a process not an event. 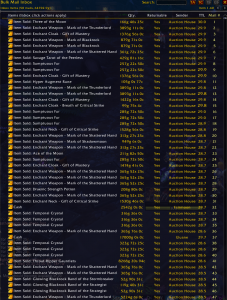 I still love making gold in world of warcraft more than anything else.  I sometimes feel like a spider in a web, tugging the strands of silk and making everything slide inexorably closer to me.  Gold cap wasn’t enough, so I made a bit more, and a bit more. Making gold in Warlords of Draenor is different to making gold in previous expansions.  The professions are changed.  The shuffles are much more obscure.  The addons give you more of an edge.  And yet anyone can still make gold, and especially with these lovely new garrisons which should be built to synergise with the buildings in your alts’ garrisons until you have a beautiful machine of harmony chugging away, churning out thousands and thousands of gold.

Previously, I had made a brief foray into streaming and teaching gold making live, but discovered quickly that I was a crap entertainer and a much better gold maker.  I have recently gained enough confidence to try again, and to simply allow you to look over my shoulder as I make WoW gold, and not feel that I have to be an all-singing all-dancing entertainer.  You can find me occasionally at www.twitch.tv/thegoldqueen

I realise that I have a lot of admin work to do to sort out the Daily Cheat Sheet, and the newsletter and get rid of all that Mists of Pandaria branding, but I reckon I can do it, if you want to have me back?