Patch 6.1 has been awesome for my Sumptuous Fur sales.

I typically buy them for 1-2g on the Auction House with the aim of reselling them for 3-4g.  Some days only a few will sell.

Today, they are selling very well.

Overcutting / Undercutting on the Auction House

This is my classic overcutting style, which is the opposite of undercutting on the auction house which you may have learned.

A twitch user was trying to troll me yesterday saying he/she knew which server I played and that they were undercutting me on some items. “Most Zen AH player ever” was the reply when I told him it was perfectly fine for him to undercut me.  You see, I have two rules about undercutting and pricing on the WoW Auction House.

1) there is plenty of gold to go around.  The rule of abundance.  Blizzard wants you to be rich.

2) I choose the price that I want to sell my item for, I don’t let the other sellers choose the price.  In the example shown below, a normal gold maker would have undercut at 1g 91s and posted in stacks of 200. 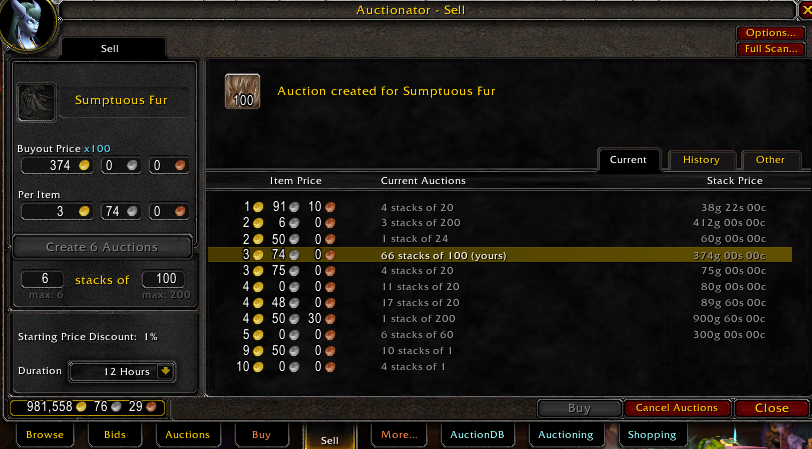 I chose purposefully to overcut and to post my item for the sales price I have chosen since the very start 3-4g.  At this price, sometimes the auctions don’t sell.  So I have to post them another day.  Sometimes they don’t sell for a few days. But eventually they do sell.  And they sell for the price that I have chosen, rather than the price chosen by the other sellers.  That’s because I know that players will buy for my chosen price.

I also sell in stacks of 100 instead of stacks of 200.  Even though 200 is the normal default stack size, stacks of 100 stand out against the crowd because they appear to stand out.  No one is stupid enough to think “oo that’s a stack of 200 for half price”.  I’m not there to scam people or confuse them.  It’s pretty obvious my items are half the price of the stacks of 200 because it’s half the amount.  But the unusualness of the stack size is enough to acquire the attention of a potential buyer.  So I often sell my stacks of 100 even though there are stacks of 1, 12, 200, 10, etc, at a lower price than mine.

I knew that the demand for raw materials (ore, herbs, leather, cloth – sumptuous fur would all increase with the release of patch 6.1, and therefore I stocked up on all the raw mats.  I intended to sell everything quickly, however the demand for potions was very high so the herbs got made into potions and sold for double their usual value.  I did, however have a lot of fur (66×100) ready for sale.  And very soon, sales started to come in. 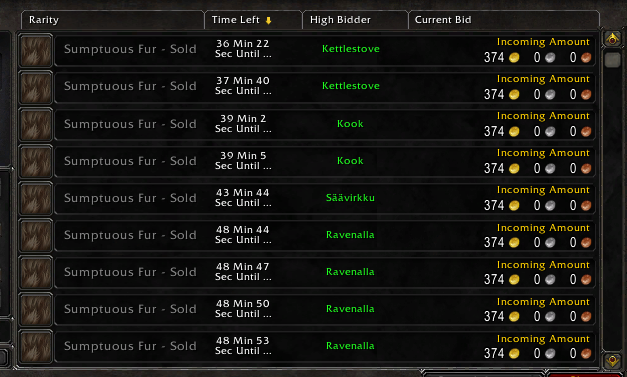 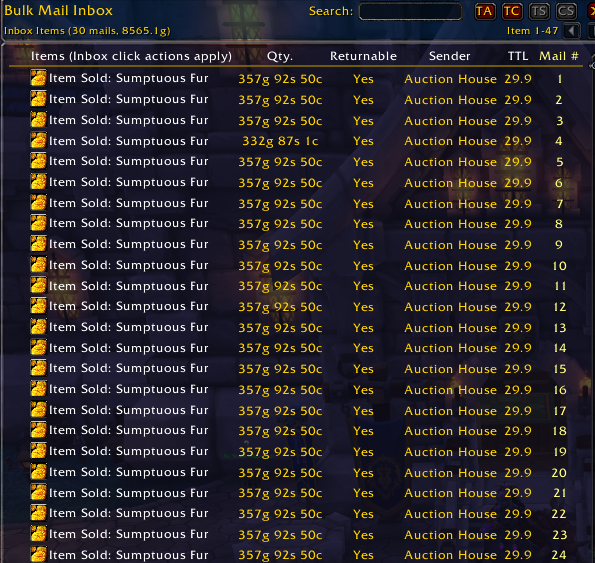 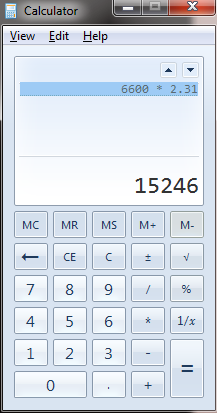 15,000g would be a nice profit to make in one day from Sumptuous Fur

I’m also doing well with transmog sales today, for the simple fact that other AH players have been focusing on their raw mats sales and left the transmog market to the hardcore gold gamers.

Which items have been selling well for you today after the release of 6.1?

The best world of warcraft gold resources on the internet