A Long Tail Alt is the New Bank Alt

Readers who have also seen my stream at twitch.tv/thegoldqueen will have noticed I spend a few hours per week on what looks like a mid level bank alt.

I recommend you do not have a bank alt, especially not wearing bank alt clothes/armor.  Having a level 1 alt immediately rouses suspicion from a potential buyer, who is slightly more likely to buy from what they think is a “Normal Regular Player” rather than a dodgy looking level 1 called “Marksbank” wearing a tuxedo. This goes back to my opinions about keeping a “golden reputation”.

I recommend you post your crafted items by the character which crafted them.  This avoids competitors stringing together A plus B and realising that you are not just one player but have a whole matrix of alts working in synergy.  You want to slip under the radar of competitors.  You want to appear non threatening.

The remaining 80% of items should be mailed to your Long Tail Alt to deal with.

More posts about the Long Tail:

Best type of Long Tail alt is a half-leveled abandoned alt, with access to a guild bank, and lots of bag space.  They should appear to competitors as just a random mid-level character who happens to have a lot of random stuff to post on the AH.

Your long tail alt will handle: 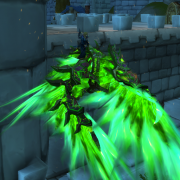 What Does That Mean?