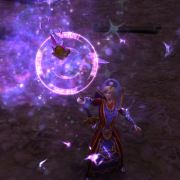 Blood of Sargeras – an update

A Blizzard Games Designer responded to players’ protests on the World of Warcraft forums today.

Hi friends – I just wanted to chime in that in the next beta build you should see more Blood of Sargeras dropping from non-tradeskill sources (dungeons, in particular).

Source: http://us.battle.net/wow/en/forum/topic/20743964229?page=4#75
First of all, I should express my gratitude that designers noted the problems and attempted to make a compromise situation.

Unfortunately, it makes only a small difference.

What does this Blood of Sargeras change mean?

If you have a dual crafter such as an Engineer/Leatherworking, you will still get less than a skinner/leatherworker or a miner/engineer.

Unless the dungeon drops per hour become equal to gathering drops per hour (and even then, non gatherers are forced into dungeons in all their spare time) then gather-crafters will continue to have an unfair advantage.

Players have been offering constructive rather than angry feedback. This makes me proud of the community.  The constructive feedback seems to be heard, and we may get a further change.  If this happens, then I will of course keep you up to date.

If you have dual gathering, drop one gathering and pick up a crafting profession and level it with cheap Warlords of Draenor mats now.

If you have alchemy, please also watch this space and read up on any Legion Alchemy threads you find on other blogs. The Blood you get from your transmute may well be useful in creating Obliterum for upgrading gear.

If you are a tailor/enchanter, watch this space, as your problem has not yet been addressed.

Continue to highlight the problem with @warcraftdevs on twitter, and if you have Legion Beta access, add your opinion on the forums here.  http://us.battle.net/wow/en/forum/topic/20743964229

The Blood of Sargeras Legion Beta Controversy – and why it matters