The servers just went down in Europe and this new patch brings me a whole host of new opportunities.  Some opportunities will be lost, like my reliable old gem business, but the first few days of 4.01 are going to net me a small fortune.

Here is a brief summary of the glyph changes. http://www.wowconfidential.com/professions/inscription/glyph-changes-in-cataclysm/ For us gold makers it means one thing: A massive surge of interest in glyphs in the first few days of the patch, tailing off over time. Which is why I spent this week crafting over 4,000 glyphs!

I spent the last few seconds on my server ploughing them into the AH on long buy out. I set a high price, several times that of the other sellers, as an incentive for other glyph sellers to price high, and earn lots of shiny gold.   I decided to start posting them early, to get in just before everyone else did.  Leading the way, rather than following.  I was very glad that I did, because they immediately started selling at 45g each, even before the patch has hit! 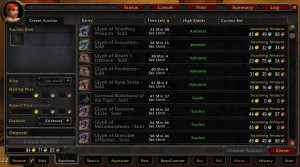 I still have not managed to post more than half of my glyph stock on the AH and already they’re flying off the shelves! I am so very excited about the coming opportunities in the next few days.

For those of you that noticed in the image that my auction house char only has 94g, that is because I keep my gold on another char, otherwise I will spend it all! heh.

(This post is from 2010, detailing the beginning of what became known as Glyphmas.)

Satchel of Exotic Mysteries in Patch 4.1