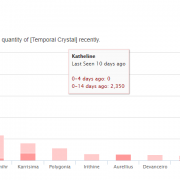 We can identify you.

We know how many items you’ve got

We know that you are an AH Bank Alt.

We know you were trying to hide your alt to avoid targeting by competitors.

We know you have 50 items to sell, but you’ve only posted one at a time, to make it seem rare.

Allow Me To Explain

On the Undermine Journal, Recent Sellers is not just a list of your competitors, but also the amount of a particular item posted in the last 0-4 and 0-14 days.

So if you have a bank alt that has been posting a rare item, such as [Loaded Gnomish Dice], or perhaps a little less rare like [Sky Golem] the Undermine Journal can see how many you have recently posted.

Using tsm you grab a replacement [thing] from your bank

To your competitors, at the AH, it looks like you have 1 single thing, and can’t sell it.  Oh you terrible failure you seem.

The savvy competitor can now see how many [things] you have posted on the AH.  That means hey can tell approx what scale of hoarding you have in your bank/s

For this reason, I often set up my big main flashy, obvious bank alt with 1,000 boring everyday items to sell on AH.  Meanwhile, other alts are quietly making millions of gold from side hustles.

Which char should you use to post on the AH?

Hide in plain sight, masquerade as a normal level 110 player selling their crafted items and items they’ve accidentally picked up as they quest.