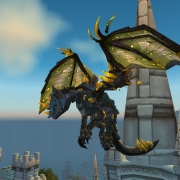 We have 9 articles for you to read, culminating in a TGQ Long Read with my own opinions. Today, I posed a question about an expensive item that your guild mate can’t afford.

Ethics:
Your guildie really wants a mount. He's been working hard to afford one.

You sell these mounts. The price is going up and up in the AH.

Your guildie sighs in guild chat, he feels like he'll never get one. That someone on the AH is putting the prices up.

Just Give it To Them!

Kaiaphin goes for the kind approach

If you can, you gift them the mount. I do it all the time.

Better than a Gift?

Nef thinks education is even better than an item. As someone whose job it is to give you gold making education, I approve!

I'd give him gold-making tips. In this case, since he's sighing in gchat and possibly knows you sell them, he's probably expecting you to give him one, and I'd ignore his passive aggressiveness. If there's a rumour he'll resell, then absolute no to giving/selling him one.

Take a Risk, it could be worth it

It was worth it for Enikka. How cute.

Traded a spectral tiger to my husband. Told him the choice was his on whether he kept it or sold it. I smiled when he mounted up next to me on his matching kitty.

Other side of the discussion

Llanilek would have no qualms.

I would ride around on said mount in front of them. Usually circling them typing /silly

What would you do in this situation?

GoldMaking Ethics – Responsibility to Other Players